At the end of this week, you will be 2 weeks pregnant, although not actually pregnant yet (see pregnancy chart). During pregnancy week 2, your body is gearing up for ovulation.

Near the end of the second week (or beginning of the third) your egg will be fertilized resulting in conception.

The gestation period is defined as 38 weeks plus 2. So the 40 weeks of pregnancy starts 2 weeks before conception or your LMP.

During your second week of pregnancy, you are still in the process of selecting and growing eggs that will 'compete' for the chance to be ovulated. FSH (Follicle stimulating hormone) starts to level off as estrogen levels rise higher. Each follicle that contains an egg (at this stage called an oocyte) will be producing estrogen.

Estrogen will thicken your endometrium (lining of the uterus) in preparation of implantation of a fertilized egg. And also what caused changes in your cervical mucus. As ovulation gets closer, your mucus will get thinner, more abundant, and more fertile (less acidic) in order for sperm to survive and be nourished as they travel through the uterus and up the fallopian tube to wait for an egg to be released.

Near the end of week 2, one oocyte (sometimes 2, and rarely 3 without medical intervention) will survive the 'race' and is enclosed in what is now called the dominant ovarian follicle. The egg and follicle grow rapidly at this stage, increasing estrogen levels at a higher rate.

Once estrogen reaches a peak, LH (luteinizing hormone) will be released. LH is the hormone that signals the dominant follicle to release the egg (ovulation) from the ovary wall and will then be swept up into the fallopian tube by the fimbria (finger-like structures at the opening of the tubes).

The fallopian tube is where fertilization (conception) occurs. And during week three of pregnancy, will travel down the tube to the uterus for pregnancy implantation.

What you can do at 2 weeks pregnant

Most of you will be ovulating at the end of week 2. This is the time for baby making sex. The best days to get pregnant are the days leading up to ovulation. Observing your signs of ovulation will help you to determine your most fertile period.

LH is the hormone which will be quickly rising and peaking near the end of this week. LH signals the follicle to release the egg. This is the hormone that an ovulation predictor kit (OPK) detects. OPK's are home ovulation testing test strips that help you predict ovulation and time intercourse appropriately.

Also, the best time of day to have intercourse is in the morning when sperm count is the highest.

Remember to have fun in the bedroom. The key word here is fun. You may be trying to make a baby but keeping it fun can keep the pressure off. And less stress can improve chances of conception during pregnancy week 2. Get more info on getting pregnant positions page for the best positions, timing, frequency, and so on.

During pregnancy week 2, your little one is still a single cell inside of a follicle inside of your ovary. But comparatively bigger than it was during week 1. 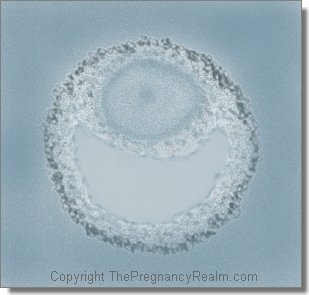 In the 2nd week, the follicle will transition from early tertiary to late tertiary development. Growing from about 5mm to 10+mm. The egg (still a primary oocyte) will be just bigger than a speck of dust still at about 0.1mm. (mm=millimeters)

Your future baby has emerged in the dominant follicle (largest and only remaining follicle) as the other follicles begin to degenerate in a process call atresia. This week before ovulation, the follicle, no longer under the influence of FSH, will grow very quickly and secrete high amounts of estrogen (mostly estradiol) which will prepare your body for possible pregnancy.

Near the end of pregnancy week 2 when estrogen levels start to peak, LH will be secreted from the anterior pituitary gland in response to the high levels of estrogen. LH signals the dominant follicle to release the egg.

Progesterone levels are still comparatively low during this stage of development. But will begin to rise shortly after ovulation.